On 8 March 2019 I was honoured to deliver a talk at the University of Leeds on the subject of women and leadership. The event was part of a day of celebrations for International Women’s Day. I have set out below a precis of my speech.

I am going to start with an idea, a personal view, and that is, based on my life experience and career so far, there is no difference in the skills needed to succeed in leadership for women than there is for men. This unshakable belief has been with me for the past 30 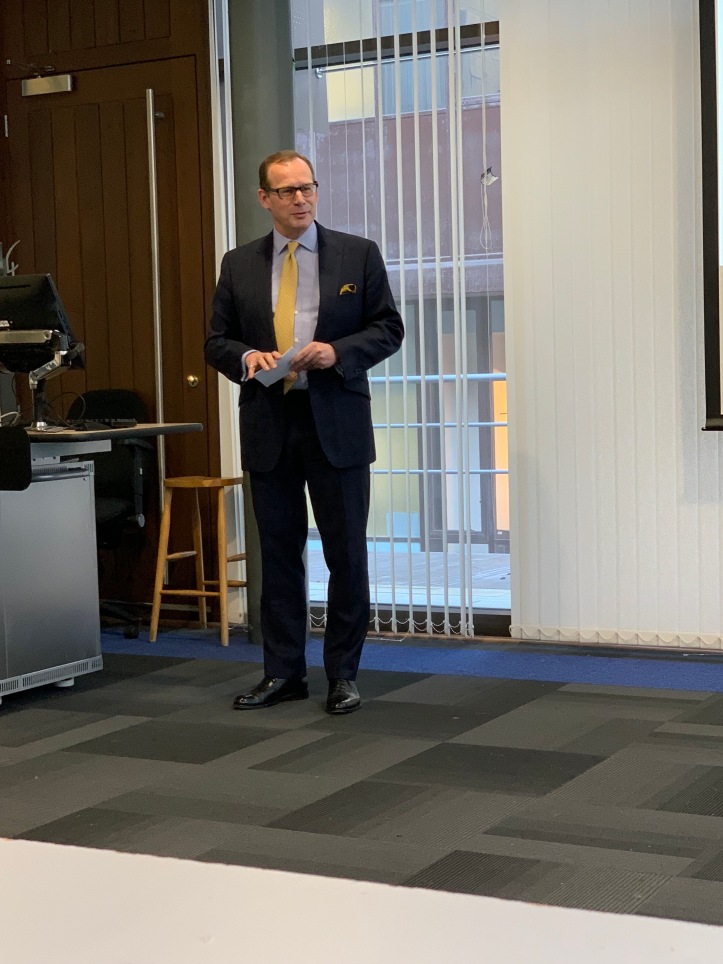 But, in 1987, Royal Air Force officer training was fully integrated. It was equal. The intake in my year of 140 cadets were broken down into what were known as flights or sections of 10, and we lived together in single rooms in a corridor in the magnificent College Hall. Rooms in those days only contained bed, a desk, wardrobe, and armchair and a sink or basin. Indeed, your next-door neighbour in your room corridor could easily have been a woman. The loo and the showers were at the end of the corridor, and you were just as likely to find one of your female colleagues from your flight entering or leaving the shower cubicles beside you at the same time as you.

During my time at Cranwell our flight of 10 people would always be led by one or us, sometimes for just one hour, sometimes up to a week, and all 10 of us took turns in doing that. It was in the field that we learnt the basics of equality, and the power of it. Leadership, at times, is about control and allocation of resources, especially about the power of resource management. Yes, men and women were considered equals at Cranwell, but as the leader in the field exercise faced with the task of moving a significantly heavy piece of equipment would I really have given that task to anybody other than the 210lb weight training fanatic member of the section, whether he was male or female? No less would I have given the task of moving a handwritten message two miles across open country with utmost speed to the fastest runner and fittest member of the team, who happened to be a 5’9” woman, who before joining the Air Force had represented the county at the 1500 m!

We were trained not to think of each other as men and women, but as equals, where each of us had strengths and weaknesses. Any of you familiar with Belbin’s team model will know the value of understanding in-depth your team and the need to have the correct balance of competing and complementary skills. Those skills are often not gender specific.

I graduated from the Royal Air Force College, and entered into an integrated workforce, and was very privileged over the next 15 years to work for some outstanding leaders, many of whom were women. We had been taught to think that in many cases sexism is not deliberate – it is often just the the way things have always been done. But, we were also trained to challenge it when we found it – the status quo was not acceptable.

Of course the benefit of those days at Cranwell was the sheer luxury of spending a year being trained in leadership. And, over the next 15 years, I think I probably spent a cumulatative 12 more months in some form of leadership training. That is 13% of a 16 year career spent in training and enhancing a core set of skills. I came to understand the power of knowing the basic skills of leadership, and then setting out to practice those basic skills over and over again until they became second nature to me. I still remember the five now, and talk about them on a regular basis:

Those are skills, but they do not replace the overall number one personal quality needed – courage.

Going back to my original idea that men and women leaders are exactly the same in terms of basic leadership skills, let me give you a conceptual model sometimes known as ‘Leadership in Action’, but what I prefer to call ‘The Leadership Loop’.

It starts at the top with a leader having followers – you do not lead an organisation, you lead people. To be truly effective those followers have to become volunteers. As an example, when I became CEO of the Nutrition Society nearly 5 years ago I inherited a staff of 10 people in the office – interestingly 9 of them were women. It is fair to say in those early days those 10 people were following me, they were curious, they wanted to know more about me before they would voluntarily follow my leadership. I had been imposed upon them. As I added new members to the team over the years (which I have personally selected) it is much easier to call them volunteers at the outset because we’d met, we discussed values and mutual interests and I knew that they would fit. The one man in the original 10 left the Society after 18 months and for the past three and a half years I have recruited only women – not by design, but by the basic principle of best person for the job.

So, the second part of the Leadership Loop is converting those followers into volunteers. A leader inspires – not manipulates. You provide clarity on the way forward.

The third component is explaining and demonstrating to those volunteers and followers that you can give them what they are looking for. That will vary, depending on the situation. It could be a meaningful salary, it could be a sense of purpose, it could be they want to belong to a team or to a great cause etc.

But then we come to the most important part of the Loop, which as a leader you are effective then in delivering what you promise. Whatever your vision, whatever you’ve outlined as your strategy or your plans, you will have a particular style that enables you to deliver what your followers and volunteers want. We move around the Loop to the final element because naturally you are going to attract new followers if you are successful and then the Loop begins again as we convert those followers to volunteers.

If we now impose upon that Loop the 5 leadership basic skills that I spoke about earlier you can begin to see how these basic skills are so important to the functionality of leadership.

The ability to create a vision sits right at the top, to be visionary, to get people excited. This converts the followers into volunteers. That requires you to have the ability to communicate. As we move around the setting out of the path you are going to take requires planning, proving that you can deliver it also requires planning and communication skills, in addition to the ability to control those that you are leading and the situation around you. Finally the glue that holds all of this together is your personal self-discipline to stay the course and to deliver what you promise.

I look at this loop, and I look at those basic five skills, and I don’t see anything gender specific in all of that. What I do see though is the need for training in the basic skills and understanding of leadership.

Imagine what we could achieve if we could dedicate more time and resources to train people in leadership before we put them in those leadership positions. It has the potential to be incredible, transformational, as it equally applies to women as to men.

The other areas which would be powerful in the support of leadership training is the use of mentoring, and of forming a support group. I believe that women are far better at those than men! That is not to say men and women should not mentor each other – I would argue I am able to mentor 10 women at the moment on my staff – should they want it!

All of this perhaps requires a paradigm shift in thinking and culture within organizations, but I would observe if you wish to change a culture you have to lead by example. Remember, I came to the Nutrition Society in 2014 already with equality embedded in my values, I had been mentored in feminism (perhaps the only ‘ism’ I approve of). So, if you lead through your values and principles you naturally take action as those values dictate. I am proud to lead an organisation where equality is embedded.

Let me sum up. I shared an idea with you that I believe there is no difference in basic leadership skills in a man or woman, I’ve outlined to you my experiences where I’ve seen that in action. I’ve also shown you a concept of leadership in action and five basic skills in leadership, and how these have no gender boundaries or restrictions. The question I now ask of all of you is what action are you going to take, and am I going to take, to create an environment, or even a movement, in nutritional science or in science in general, for those of you who are not in our nutritional world, where we can train women to be leaders in these basic skills, but also put in place a support mechanism, and mentorship, for those women. Can you imagine, can you even begin to comprehend, the power to change that would come from such a movement where leadership is led by values of equality. Thank you.